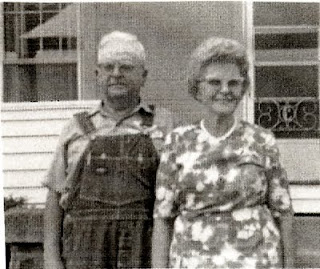 Glenn and Cora Cottrell
Harold Glenn Cottrell was born October 21, 1902, in Wapello County, Iowa to Tom and Lottie (Grove) Cottrell.  Glenn attended rural schools at Ottumwa before coming with his parents and brother to a farm near Woodburn in 1917.  He then attended Red Wing School and graduated from Woodburn High School.  In 1925, he married Arline E. Robins who was born January 23, 1903, and died October 25, 1927.  She is buried at the Woodburn Cemetery.  On July 29, 1930, Glenn married Cora Belle Horton.  She was born July 25, 1904, in Leroy, Iowa, to John Davenport and Lizzie Jane (Benson) Horton.  Cora taught school before her marriage.
In April, 1928, Glenn opened the Standard Oil Gas Station, which was later a DX Service Station, known as Cottrell & Son Service Station.  He and Cora also owned the hardware store for a short time.  They attended the Woodburn Christian Church.  Cora belonged to the Eastern Star and the Legion Auxiliary.  Glenn belonged to the Masonic Lodge and the Eastern Star.  Their entire married life was spent in Woodburn.
Glenn passed away on June 5, 1978, at Osceola, and Cora on February 12, 1984, at Osceola.  They are buried in the Woodburn Cemetery.   Glenn and Arline's children:  Harold Thomas "Tom" and Anna Dell [Gonseth].   Glenn and Cora's son is Larry Lew. 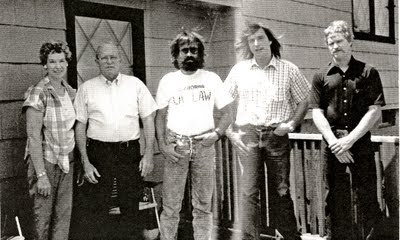 Harold Thomas “Tom” Cottrell was born on January 29, 1926, in Clarke County, Iowa, to Glenn and Arline (Robins) Cottrell.  Tom graduated from Woodburn High School in 1944.  He served two years in the Navy and returned to Woodburn where he operated Cottrell & Son Service Station until his death.  He married LaVera Fitzpatrick on June 27, 1949, at Chariton, Iowa.  LaVera is the daughter of Patrick Vinson “P.V.” and Nellie (Viertz) Fitzpatrick.  She was born in Lucas County, Iowa, near the Clarke County line.
LaVera attended Woodburn High School one year and church at Woodburn during her childhood and after her marriage.  She taught school before their marriage and worked for many years at the Hy-Vee offices at Chariton, Iowa.  Tom belonged to the Woodburn Christian Church, the Woodburn Firemen, and the Woodburn American Legion.  LaVera belongs to the Catholic Church and the Woodburn Legion Auxiliary and was very active with the preservation of the Woodburn St. Mary's Catholic Church.  Tom passed away on July 10, 1994, at Methodist Hospital in Des Moines, IA.  He is buried at the Woodburn Cemetery.  Their children:  Harold Thomas Jr. "Tom", James Patrick "Jim", Dennis Eugene "Denny".
Posted by LD