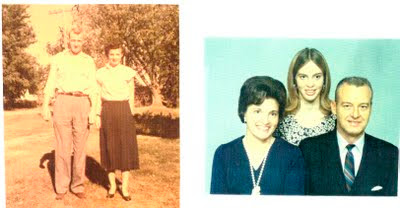 Jean (Webb), Cheryl and Cecil Davenport
﻿Cecil Leroy Davenport was born October 10, 1921, south of Woodburn, son of Roy and Bessie (Viertz) Davenport. Cecil attended Red Wing school through the 8th grade.  He attended Woodburn High School and graduated in 1939.   He worked in a garage before and after school that was operated by John Crist and Cecil’s brother, Merle.  He operated the turntable at dances during the late 30’s through the late 40’s, and also operated the movie projector for movies in the park.  Cecil played basketball while in high school and pitched on baseball town teams after returning from the service.   After graduation he worked for Clarke County, the pipeline, and Lockheed in California.  He enlisted in the Navy and served three years in the submarine service and was discharged in 1945.  He married Betty Jean Webb on May 28, 1950.
Betty Jean Webb was born April 18, 1930, in Madison County, Iowa, the daughter of Floyd “Mike” and Eva (Sink) Webb.  They lived in Dallas County before moving to Van Wert in 1934.  They lived on farms there until they moved to Clarke County, and then moved to Woodburn in 1944.  Jean attended Lewis school in Clarke County, finished 8th grade at Woodburn, and graduated from Woodburn High School in 1948.  Her three sisters and her did a lot of singing – they entered amateur contests, sang in church, and at some funerals.   After graduation, Jean worked at Miller & Garris and Banta Abstract until she was married.

After marriage, Cecil and Jean lived in Woodburn until 1956.  Cecil had his own garage in the old seed house and for a short time in the old garage building.  He was on the Woodburn Fire Department ten years, and served on the City Council and other community projects.  He is a charter member of the reorganized American Legion.  Cecil worked for Underwood Auto in 1949, as there was no building available, then came back to Woodburn in 1950 until 1952.  He went to work for Underwood Auto in 1952 until his retirement in 1986.  Cecil died December 17, 2006.
Jean worked as Deputy Recorder from 1952 to 1955.  She did not work outside the home until Cheryl was a senior in high school.   Jean was involved in the Woodburn Legion Auxiliary, Methodist Church, Girl Scouts,  American Heart Association, etc.  In 1974, Jean went to work at Furnas Electric, she retired in 1995, and now works part-time at the Osceola Public Library.  Their daughter is Cheryl [Zach].
Posted by LD