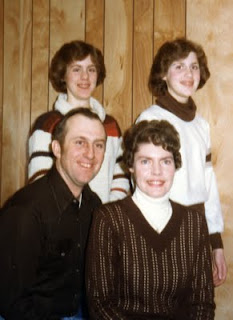 Condon Maurice Clark was born November 2, 1937, the son of Maurice and Freda (Gibson) Clark.  Condon’s family always lived in the Osceola area.  He graduated from Osceola High School and served four years in the Air Force.  He married Virginia Louise Harned on November 10, 1961.  Virginia was born on February 27, 1939, the daughter of Charles and Eleanor (Flesher) Harned.  She graduated from Indianola High School and her family moved to Murray after her graduation and later to Osceola.  Virginia worked at the Clarke County State Bank, Clarke County Mutual Telephone and ASCS office before their marriage.  Virginia met Peggy Frizzell while working at the bank, who encouraged her to write to her friend, Condon, who was in the Air Force.   This correspondence led to their marriage.
Condon and Virginia and family moved to the Woodburn area in 1967 on the Alvin Marquis farm.  Condon and Virginia still live on this farm, having purchased part of it in 2003 and built a home.   Condon farms and enjoys woodworking when he gets the time. Virginia worked at Robinson’s Department Store in Osceola for several years and now helps Condon with the farm and also does seamstress work.  She is a beautiful seamstress, having made western suits for Condon, her daughter’s wedding dresses, and most of their clothes as they grew up.  For several years, they have been in business with Virginia’s brother, Carroll Harned.   They fabricate fenders and aftermarket parts for Harley Davidson motorcycles from fiberglass.
They attend the Woodburn Christian Church, where Virginia enjoys playing the organ and piano and Condon serves as Elder.  Virginia and the girls were active in the church choir.  Lynnette taught Sunday school and Bible school for many years.  Condon and Virginia were members of the Woodburn Booster Club for several years and Condon is a member of the American Legion.   Their children are Lynnette Renae [Davis] and Connie Louise [Coy].
Posted by LD