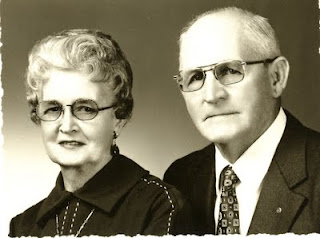 Viola (Heston) and Loren Davis
Loren Wesley Davis, son of Fred and Georgia Willa (Pownell) Davis, was born on May 2, 1906, near Woodburn.  Loren married Viola Floy Heston, daughter of Clyde and Almeda (Carson) Heston, on March 12, 1927, at Chariton, Iowa. Viola was born in Lucas County, Iowa, on Sept. 22, 1906.  She graduated from Woodburn High School and attended Corydon Junior College and Drake University.
Loren and Viola farmed north of Woodburn on her parent’s farm.  Loren enjoyed fishing.  He served as township assessor and on the Clarke County Board of Education.  He was a member of Unity Lodge #3212 A.F. and A.M. at Woodburn.  They were members of the Woodburn Christian Church. Viola taught at Center Star and Woodburn schools for 20 years.  Her family was very proud of her accomplishment of going back to college and returning to teaching after her children were grown. She was a member of the Eastern Star Chapter at Woodburn and the Retired Teachers Association.
The last years of their lives they were cared for by Joanne Parmer in her home in Osceola.  Loren passed away on April 15, 1989, at Osceola, and Viola on February 13, 1991, at Osceola.  They are buried at the Woodburn Cemetery.  Their children:  Phyllis Elaine[Wright], Norris Duane and Darrell Dean. 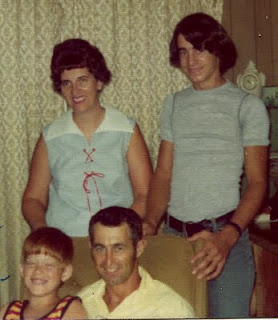 Thelma, Steve
Scott, Darrell
Darrell Dean Davis was born February 17, 1933, near Woodburn, son of Loren Wesley and Viola Floy (Heston) Davis. Darrell graduated from Woodburn High School in 1951.  He enjoyed playing baseball and basketball while in school.  Following graduation, he worked on the railroad for a few months, after which he went to Des Moines to work.  He joined the U.S. Coast Guard in 1952 and was sent to California for boot camp training.  After boot camp, he came back home and married Thelma Louise Ritter, daughter of Aaron and Martha Mae (Wilson) Ritter, on August 14, 1952, in Osceola, Iowa.
After being discharged from the service, the Davis’ moved back to Iowa.  Darrell worked at the Skelly Gas Station for several months. They moved 3 miles south of Woodburn on the Delmar Bryant farm in October, 1956, which they rented and Darrell farmed with his dad.   They later were able to purchase the Bryant farm.
Darrell and Thelma enjoyed watching sports – especially the Iowa Hawkeyes and movies.  They were members of the Woodburn Christian Church where Darrell served as deacon and Thelma as deaconess.  Darrell passed away on June 15, 2000, and is buried at the Woodburn Cemetery.

Thelma worked part-time at the Woodburn Post Office.   She enjoys crocheting, watching movies and reading, especially mysteries.   She sold the farm in 2002 and moved into a duplex in Osceola with her sister and brother-in-law, Ada and Cecil Rodda.   Their children are Steven Duane and Scott Alan.
Posted by LD