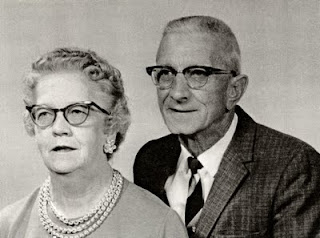 Glida (Cline) and Pete Boor
﻿
Russel Warren "Pete" Boor was born on July 14, 1901, at Woodburn, IA, son of William Franklin and Lutitia Elizabeth (Dukes) Boor. He was born on the family farm on Whitebreast Creek southwest of Woodburn. Russel attended East Concord School and walked the one mile each day to and from school. After grade school he continued to work on the farm with his father, both on Whitebreast Creek and on the farm one mile south of Woodburn.
Glida Opal Cline was born on June 4, 1904, at Woodburn, IA. She was the daughter of Elmer Ellsworth  "El" and Nettie Evelyn (Wiard) Cline.  El owned a harness shop in turn of the century Woodburn.  Glida's sisters that lived in the Woodburn area were Dorothy [Evans], Charlene [Oliver], and Ona [Powell].    She received her education in Clarke County and graduated from 11th grade at Woodburn High School in 1921 and from 12th grade in Osceola in the spring of 1922. That summer she attended Normal Training School at Chariton, Iowa, and began her teaching career in the fall of 1922 at the Lowe School south of Woodburn. She taught at Lowe two years, until her marriage.
Pete and Glida were married on June 10, 1924 at Indianola, IA, and lived on farms in the Woodburn area. Pete had a general trucking business and in 1943, after his father passed away, he took over the Boor Seed, Feed and Coal Business, next to the railroad tracks in Woodburn. He also had the Seed House in Woodburn. This was the wood frame building built around 1910 on the corner where Highway 104 curves into Woodburn. It became a landmark as all directions given were based on the "Seed House Corner". This building burnt in 1979. 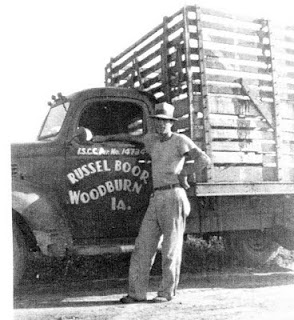 Glida returned to teaching in 1943, and taught at Red Wing School, south of Woodburn for one term, 1943-1944. She then taught at Center Star School north of Woodburn for eight years, 1944-1952. In the fall of 1952, Glida began teaching in the Woodburn School and taught there for nineteen years, retiring in 1971. She touched many lives and had a big influence on many children during her thirty years of teaching in Clarke County schools. She never forgot "her students" and was interested in their progress through high school and on in life.
After Pete and Glida retired they sold their home in Woodburn in March, 1974, and moved to an apartment in Indianola and later moved to Osceola. They were both active in the community and attended all school functions while their children were in school at Woodburn. Glida was a Fifty Year Member of the Eastern Star Chapter in 352 Woodburn. Pete passed away on June 11, 1979, and Glida on October 22, 1991. They are both buried at the Woodburn Cemetery.   Their children are Barbara Jean (wife of Ivan Mason) and Bob Boor.
Posted by LD